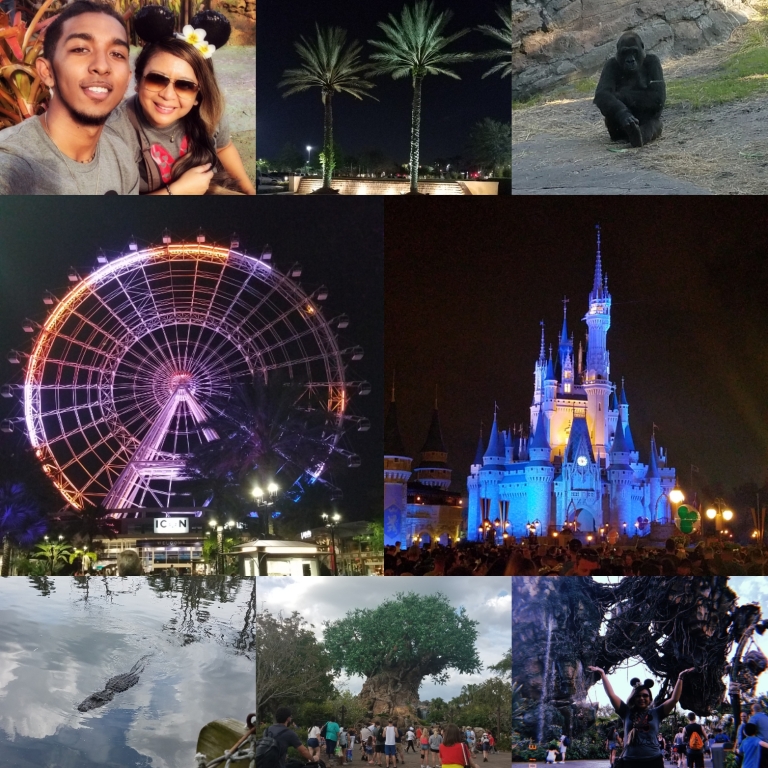 So I finally believe the hype!  I never had a chance to take my son to Disney World when he was younger, so it was an opportune time to finally plan a trip with him for his spring break and boy did we have a great time!  I can now say, if you ever have the opportunity to go to Disney World or Disney Land, definitely go because it will be a trip to remember.  It does take planning, however, especially for a family of four or more and now I understand why people go more than once.  There is just so much to do and very little time to squeeze everything in on a four-day trip to Orlando.  Aside from Disney World are numerous other things to do in the area.  Here is a look at what we did while we were there…

We stayed at the Crowne Plaza and Hilton Garden Inn Orlando International North.  The views were nice on the top floor of Crowne Plaza and the front desk was friendly.  Room service was also great.  Our stay at Hilton Garden Inn was good.  I frequented the snack area which had a great selection of snacks, food, drinks and toiletry items.  Unfortunately we did not get to try breakfast since we slept in every day.

Day 1- I bought two tickets with the hopper option therefore we were able to make it to three parks.  We made our first stop at Epcot and worked our way to Animal Kingdom, which I enjoyed the most, then lastly Magic Kingdom to see the fireworks.  We had an awesome time at Disney World!  Overall, what I enjoyed most was all of Animal Kingdom and the fireworks at Magic Kingdom.

Gatorland’s zip line was awesome!  It consisted of five zip lines and a couple soared over gators.  I was really looking forward to this adventure because I was all about zip lines in 2018 and this one was the only one I did not get to check off my list.  A bit delayed but definitely glad I conquered it.  Pictures of the adventure were made available for purchase in the end.  I bought the flash drive of all our photos.  The only bummer was that they did not allow you to use cameras during the zip line rides, unlike the zip lines I went on in Jamaica and Hawaii.  Other than that, I loved it.  The zip line conductors were professional and very friendly.  This is a definite must if you are ever in Orlando!

Wicked Airboat Rides was eleven miles from Gatorland therefore we went soon after our zip line adventure.  Fairly reasonable in price and docking every 30 minutes, it was worth the price, $19.99 per person.  We also bought souvenir items from the check-in office.  The captain was a good host.  He took us on a short boat ride where he showed us a few gators hiding.  It was short and sweet, and fun as well!  Definitely a must if you are in Orlando.

Mall at Millenia was lined with many of our go to shops.  The only problem was when we arrived via Lyft, we were told in almost minutes that picture taking and video filming were not allowed on property, by mall security.  Wow, what a way to ruin a tourist’s adventure at the mall.  My son is a vlogger and me a blogger, therefore pictures are a must!  I took a few pictures of him at the entrance and he told us it looked like we were taking modeling photos so they found it necessary to let us know that cameras were not allowed on property.   Other than that, nice mall but nothing I’ve never seen before.

Icon Orlando was great.  Every group was able to ride in their own pod.  It was not my first time on the ride, which was formerly the Orlando Eye by Coca-Cola, but this time I got to ride in the evening and it was definitely a lot better.  The views weren’t that impressive but the ride was smooth and great.  One improvement would be the music in the pod.  It was not self-controlled and it was loud techno pop.  Just a suggestion, if you are going to include music on the ride, I think it’s safe to go with universal pop music and at a much lower volume so that you can still carry on a conversation.  In addition, it would be nice to be able to sync to your own music given the ride was about twenty minutes long.  The pods included a tablet and Wi-fi access but it did not have syncing capabilities.  This could possibly be a great place to take your significant other for a view of the city.  They also had pods that included a bar therefore it would be great for celebrating with family, friends or co-workers as well.

Day 3- Our last full day was spent at Cocoa Beach!  I was looking forward to a relaxing day on the beach, after all the walking and sightseeing we did.  We rented an umbrella and two chairs for $20 (available daily from 9am-5pm).  It was relaxing, but an overcast and windy day.  We ate seadogs (hot dogs) which were available at the food stand near the entrance of the pier.  The watermelon iced tea was delicious and it came with a pasta straw, turtle and bird friendly!  Although it was spring break, the beach was not crowded so that was definitely a plus.

I wish our trip was longer but I’m glad we finally had an opportunity to experience a Disney vacation.  Please check out my pictures and videos on Instagram!